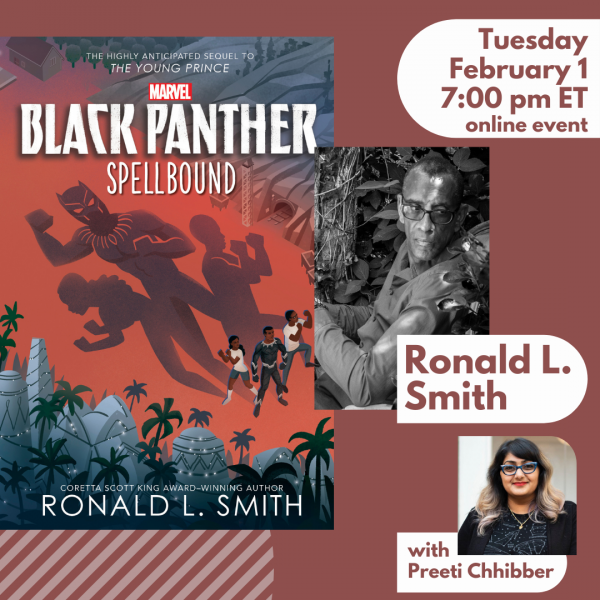 BLACK PANTHER SPELLBOUND, the second book in the hit Young Prince series from Ronald L. Smith releases in February, and we are so excited to welcome him to our online platforms to talk about it with author, super fan and podcast host Preeti Chhibber! (Note: this event moved to February from September 2021)

--> This event is free, but please

Join us online on Facebook or YouTube (links to come). If you register to attend, we will also email the direct links to you.

I'm T'Challa. The Prince of Wakanda. Son of T'Chaka. And one day, I will wear the mantle.

Thirteen-year-old T'Challa can't wait to go back to America to visit his friends Sheila and Zeke, who are staying with Sheila's grandmother in Beaumont, a small Alabama town, over their summer break. He's thrilled to be on vacation away from his duties as the Prince of Wakanda for a few weeks, and he's taking full advantage of his access to the amazing food and the South's rich history.

But as T'Challa continues to explore the town, he finds that a man who goes by the ordinary name of Bob happens to be everywhere he is—and T'Challa begins to think it's no coincidence.

When residents of the town begin flocking to Bob's strange message, and a prominent citizen disappears, the Young Prince has no choice but to intervene.

T'Challa and his friends start to do their own sleuthing, and before long, the three teens find themselves caught in a plot involving a rare ancient book and a man who's not as he seems.

Swept up in a fight against an unexpected and evil villain, T'Challa, Sheila, and Zeke must band together to save the people of Beaumont . . . before it's too late.

Ronald L. Smith is an award-winning writer of children's literature including the middle grade novels Black Panther: The Young Prince, The Mesmerist, The Owls Have Come To Take Us Away, and Gloom Town, a Junior Library Guild Selection. His first novel, Hoodoo, earned him the 2016 Coretta Scott King/John Steptoe New Talent Author Award and the International Literacy Association Award for Intermediate Fiction. Before he became a full-time writer, he worked in advertising and wrote TV commercials for big corporations. He is much happier writing books for young people. Follow him on Twitter @RonSmithBooks or Instagram at @ronsmithwriter.

Preeti Chhibber has spent her life being a fan of being a fan. Hailing from Florida, she spent a decade working in children's publishing in New York before leaving to pursue writing full time. She's written for SYFY, BookRiot, BookRiot Comics, The Nerds of Color, and The Mary Sue, among others. Her short story, "Girls Who Twirl and Other Dangers" was published in the anthology A Thousand Beginnings and Endings (HarperCollins, 2018). You can find her co-hosting the podcasts Desi Geek Girls and Strong Female Characters (SYFYWire). She's appeared on several panels at New York Comic-Con, San Diego Comic-Con, and on screen on the SYFY Network. Honestly, you probably recognize her from one of several BuzzFeed "look at these tweets" Twitter lists. She usually spends her time reading a ridiculous amount of Young Adult but is also ready to jump into most fandoms at a moment's notice. (@runwithskizzers)

A Thousand Beginnings and Endings (Paperback)

Star Wars A Jedi You Will Be (Hardcover)

Battle of the Bands (Hardcover)