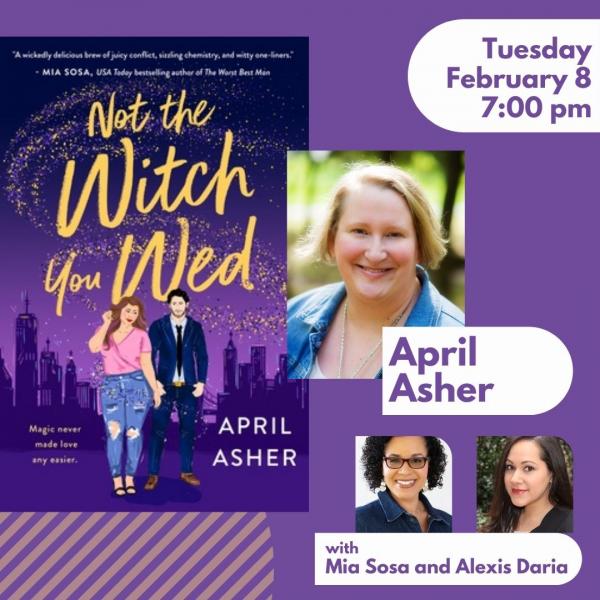 April Asher celebrates NOT THE WITCH YOU WED with Mia Sosa and Alexis Daria! This fun online discussion will be moderated by Trisha Brown, Book Riot’s When In Romance podcast.

--> This event is free, but please

Join us online on Facebook or YouTube (links to come). If you register to attend, we will also email the direct links to you.

A fake relationship between a magic-less witch and a wolf shifter turns to more in the start of a bewitching new paranormal rom-com series.

Magic-less witch Violet Maxwell wants nothing to do with alpha wolf shifter Lincoln Thorne—the man who broke her fragile, teenage heart. But when the two of them are forced by arcane Supernatural Laws to find mates, Violet and Lincoln agree to fake-date their way to a fake-mating in order to conjure themselves some time.

The joke’s on them. When old feelings make a reappearance—along with Violet’s magic—they both realize there’s nothing fake about their feelings. But there are old secrets and looming threats that could snatch away their happily ever after, again. One thing’s for sure: magic doesn’t make dating and love any easier.

In NOT THE WITCH YOU WED , April Asher brings all the hilarity and sweet, sexy moments you love in a romantic-comedy—plus a fun dose of magic—to this spell-binding new series about being sexy, single, and supernatural in New York City.

April Asher, aka April Hunt, was hooked on romantic stories from the time she first snuck a bodice-ripper romance out from her mom's bedside table. She now lives out her own happily-ever-after with her college-sweetheart husband, their two children, and a cat who thinks she's more dog—and human—than feline. By day, April dons dark blue nursing scrubs and drinks way too much caffeine. By night, she still consumes too much caffeine, but she does it with a laptop in hand, and from her favorite side of the couch. From the far left cushion, April Asher pens laugh-out-loud romantic comedies with a paranormal twist, but when she’s not putting her characters into embarrassing situations with supernatural entities, she also writes high-octane romantic suspense as April Hunt, her thrill-seeking alter ego who has written the Alpha Ops and Alpha Security series.

USA Today bestselling author Mia Sosa writes funny, flirty, and moderately steamy contemporary romances that celebrate our multicultural world. A graduate of the University of Pennsylvania and Yale Law School, Mia practiced First Amendment and media law in the nation’s capital for ten years before trading her suits for sweatpants. Born and raised in East Harlem, New York, she now lives in Maryland with her college sweetheart, their two book-obsessed daughters, and one dog that rules them all.

Alexis Daria writes stories about successful Latinx characters and their (occasionally messy) familias. Her debut Take the Lead won the 2018 RITA® Award for “Best First Book” and her latest release, You Had Me at Hola, is a national bestseller, Target Diverse Book Club Pick, and New York Times Editor’s Choice Pick. Alexis is a lifelong New Yorker who loves Broadway musicals and pizza.

The Wedding Crasher: A Novel (Paperback)

You Had Me at Hola: A Novel (Paperback)