Such a Good Mother: A Novel (Paperback) 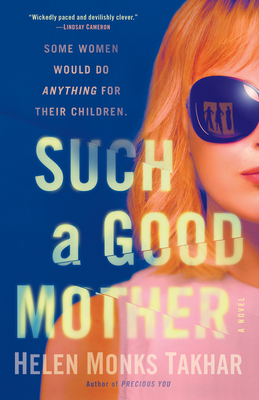 Such a Good Mother: A Novel (Paperback)


On Our Shelves Now
Some women would do anything for their children. This provocative novel “goes straight for the jugular of modern motherhood” (Lindsay Cameron, author of Just One Look)—from the author of the “addictive” (People) thriller Precious You.

“Mothers and hustlers can be a lethal combination—and the perfect recipe to keep you up all night.”—Amanda Eyre Ward, New York Times bestselling author of The Jetsetters

Rose O’Connell is barely surviving. Her marriage is rocky; her son isn’t fitting in at his new school, the prestigious Woolf Academy; and their tiny apartment in a rapidly gentrifying neighborhood can barely contain her family. As she struggles to make ends meet on her junior bank teller wages, Rose finds that life as the only mom in a name tag and uniform at the Woolf’s shiny school gates isn’t easy.

Not so for those in the elite and secretive Circle—a tight-knit group of wealthy mothers, led by the charismatic and glamorous Amala Kaur—who rule the school. When the mysterious death of one of the Circle’s members creates a vacancy, Rose dares to hope she could fill it and transform her life.

Amala’s shocking decision to invite Rose into her clique provokes resentment among the Circle, especially when her fortunes, self-esteem, and status start to soar. But Rose soon realizes the true price of being on the inside. Far from being a dream come true, the Circle proves her worst nightmare. Unlike the woman she replaced, can Rose escape with her life?

Taut, complex, and compulsively readable, Such a Good Mother is a razor-sharp take on the myth of having it all.
Helen Monks Takhar is the author of the novel Precious You. She is also joint managing director of the production company Second Generation with her husband, screenwriter and executive producer Danny Takhar. Helen worked as a journalist, copywriter, and magazine editor after graduating from Cambridge University. She began her career writing for financial trade newspapers before contributing to UK national newspapers including The Times and The Observer. She lives in North London with her husband and two daughters.
“I picked up Such a Good Mother and was absolutely transfixed. What mother hasn’t considered doing absolutely anything to get into a circle of friends who can make her life more bearable and give her children access to the best things in life? I completely identified with Monks Takhar’s heroine, Rose . . . until I couldn’t believe what I was reading. Mothers and hustlers can be a lethal combination—and the perfect recipe for a novel to keep you up all night.”—Amanda Eyre Ward, New York Times bestselling author of The Jetsetters

“Wickedly paced and devilishly clever, Such a Good Mother showcases the terrifying lengths some parents will go to secure privileges for their children. A delicious and addictive read that goes straight for the jugular of modern motherhood.”—Lindsay Cameron, author of Just One Look

“Everyone wants to join The Circle. But is it all that it’s cracked up to be? Who is conning who? And can one woman outplay them all? If you’re looking for smart, suspenseful prose, look no further. Helen Monks Takhar is now on my favorite list of authors. . . . Exceptional, taut, and emotional storytelling in Such a Good Mother.”—Georgina Cross, author of Nanny Needed