A Ballad of Love and Glory: A Novel (Paperback) 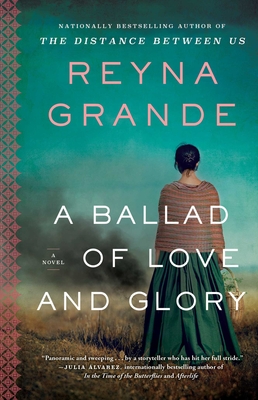 A Ballad of Love and Glory: A Novel (Paperback)


On Our Shelves Now - Please Allow up to 24-48 hours for Curbside Pickup
A Long Petal of the Sea meets Cold Mountain in this “epic and exquisitely wrought” (Patricia Engel, New York Times bestselling author) saga following a Mexican army nurse and an Irish soldier who must fight, at first for their survival and then for their love, amidst the atrocity of the Mexican-American War—from the author of The Distance Between Us.

A forgotten war. An unforgettable romance.

The year is 1846. After the controversial annexation of Texas, the US Army marches south to provoke war with México over the disputed Río Grande boundary.

Ximena Salomé is a gifted Mexican healer who dreams of building a family with the man she loves on the coveted land she calls home. But when Texas Rangers storm her ranch and shoot her husband dead, her dreams are burned to ashes. Vowing to honor her husband’s memory and defend her country, Ximena uses her healing skills as a nurse on the frontlines of the ravaging war.

Meanwhile, John Riley, an Irish immigrant in the Yankee army desperate to help his family escape the famine devastating his homeland, is sickened by the unjust war and the unspeakable atrocities against his countrymen by nativist officers. In a bold act of defiance, he swims across the Río Grande and joins the Mexican Army—a desertion punishable by execution. He forms the St. Patrick’s Battalion, a band of Irish soldiers willing to fight to the death for México’s freedom.

When Ximena and John meet, a dangerous attraction blooms between them. As the war intensifies, so does their passion. Swept up by forces with the power to change history, they fight not only for the fate of a nation but for their future together.

“A grand and soulful novel by a storyteller who has hit her full stride” (Julia Alvarez, author of In the Time of the Butterflies), A Ballad of Love and Glory effortlessly illuminates a largely forgotten moment in history that impacts the US–México border to this day.
Reyna Grande is an award-winning author, motivational speaker, and writing teacher. As a young girl, she crossed the US–Mexico border to join her family in Los Angeles, a harrowing journey chronicled in The Distance Between Us, a National Book Critics Circle Award finalist. Her other books include the novels A Ballad of Love and Glory, Across a Hundred Mountains, and Dancing with Butterflies, the memoirs The Distance Between Us: Young Readers Edition, and A Dream Called Home, and the anthology Somewhere We Are Human: Authentic Voices on Migration, Survival, and New Beginnings. She lives in Woodland, California, with her husband and two children. Visit ReynaGrande.com for more information.