Buzz Saw: The Improbable Story of How the Washington Nationals Won the World Series (Compact Disc) 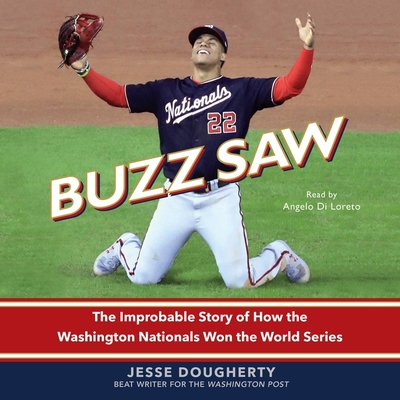 By Jesse Dougherty, Angelo Di Loreto (Read by)
$39.99
Email or call for price.

The remarkable story of the 2019 World Series champion Washington Nationals told by the Washington Post writer who followed the team most closely.By May 2019, the Washington Nationals--owners of baseball's oldest roster--had one of the worst records in the majors and just a 1.5 percent chance of winning the World Series. Yet by blending an old-school brand of baseball with modern analytics, they managed to sneak into the playoffs and put together the most unlikely postseason run in baseball history. Not only did they beat the Houston Astros, the team with the best regular-season record, to claim the franchise's first championship--they won all four games in Houston, making them the first club to ever win four road games in a World Series. "You have a great year, and you can run into a buzz saw," Nationals pitcher Stephen Strasburg told Washington Post beat writer Jesse Dougherty after the team advanced to the World Series. "Maybe this year we're the buzz saw." Dougherty followed the Nationals more closely than any other writer in America, and in Buzz Saw he recounts the dramatic year in vivid detail, taking readers inside the dugout, the clubhouse, the front office and ultimately the championship parade. Yet he does something more than provide a riveting retelling of the season: he makes the case that while there is indisputable value to Moneyball-style metrics, baseball isn't just a numbers game. Intangibles like team chemistry, veteran experience and childlike joy are equally essential to winning. Certainly, no team seemed to have more fun than the Nationals, who adopted the kids' song "Baby Shark" as their anthem and regularly broke into dugout dance parties. Buzz Saw is just as lively and rollicking--a fitting tribute to one of the most exciting, inspiring teams to ever take the field.