Always the First to Die: A Novel (Paperback) 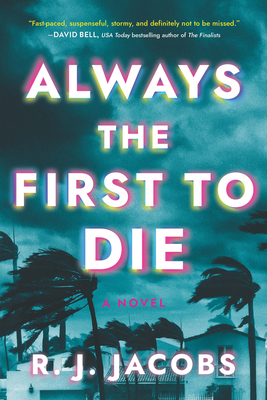 Always the First to Die: A Novel (Paperback)

"R. J. Jacobs is a masterful storyteller. A must read." —Alex Finlay, author of The Night Shift and Every Last Fear

For fans of Riley Sager with a classic slasher twist comes a chilling thriller following a former horror movie actress who returns to the set of her most famous film...and is soon entangled in a series of terrifying events that resemble the plot of that one cursed movie.

For Lexi, the Pinecrest Estate has become a place of horror. The dilapidated manor house in the Florida Keys, once the site of her teenage movie debut, is now haunted by memories. Memories of working on a legendary horror director's most famous film and of the terrible death that propelled them all to infamy. And ever since Lexi fled the Keys, she has vowed to never return.

Until, years later, her daughter escapes to the Pinecrest in search of answers. Right when a Category 4 hurricane hits the southern coast.

Now, Lexi is back on the ravaged island with only a few remaining behind, and soon enough, her life begins to resemble the plot of her most famous film. And this time, she's not sure who will make it out alive.

"An utterly unique thriller that combines horror movies, hurricanes, and deadly secrets from the past...definitely not to be missed"—David Bell, USA Today bestselling author of The Finalists

"Solid mystery...Jacobs makes good use of traditional horror tropes—things that go bump in the night, dark rooms, a creepy mansion, and no phone service—while convincingly showing Florida before and after a category-four hurricane. Horror film buffs will want to check this one out." — Publishers Weekly

"RJ Jacobs' Always the First to Die is an utterly unique thriller that combines horror movies, hurricanes, and deadly secrets from the past. It's also an intense ride about a mother who will do anything to save her daughter. Fast-paced, suspenseful, stormy, and definitely not to be missed" — David Bell, USA Today bestselling author of The Finalists

"A storm is coming and its name is Always the First to Die. It's a breathtaking thriller filled with jaw-dropping twists and lump-in-the-throat emotion—a love letter to cinema and family. R. J. Jacobs is a masterful storyteller. A must read." — Alex Finlay, author of The Night Shift and Every Last Fear

"In Always the First to Die, fans of horror movie tropes will fly through this fast-paced thriller. A deliciously wicked read." — Rea Frey, award-winning author of Not Her Daughter and Secrets of Our House

"Nothing sets up the perfect conditions for a locked room mystery like being trapped in the Florida Keys, especially if you're there to rescue your daughter from your horror film producer father-in-law, who's trying to repeat both the success and sacrifices of his most famous production. Also, there's an unstable actress ready to sue the production and convinced that someone's trying to kill her. And that husband who went missing a year back? Maybe you're about to find out why. Fans of horror cinema will enjoy the meta-textual elements of the novel, as the characters frequently discuss not just scary movies, but the nature of fear itself. " — CrimeReads