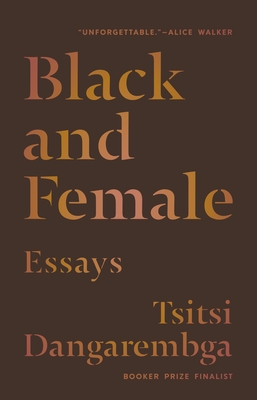 The first wound for all of us who are classified as “black” is empire.

In Black and Female, Tsitsi Dangarembga examines the legacy of imperialism on her own life and on every aspect of black embodied African life.

This paradigm-shifting essay collection weaves the personal and political in an illuminating exploration of race and gender. Dangarembga recounts a painful separation from her parents as a toddler, connecting this experience to the ruptures caused in Africa by human trafficking and enslavement. She argues that, after independence, the ruling party in Zimbabwe only performed inclusion for women while silencing the work of self-actualized feminists. She describes her struggles to realize her ambitions in theater, film, and literature, laying out the long path to the publication of her novels.

At once philosophical, intimate, and urgent, Black and Female is a powerful testimony of the pervasive and long-lasting effects of racism and patriarchy that provides an ultimately hopeful vision for change. Black feminists are “the status quo’s worst nightmare.” Dangarembga writes, “our conviction is deep, bolstered by a vivid imagination that reminds us that other realities are possible beyond the one that obtains.”

“A compelling collection. . . . Black and Female . . . [yokes] the personal and political to demonstrate how the experience of race and gender depends not on overarching essentialism but on local histories that are written on the body.”—Ismail Muhammad, New York Times Book Review

“Dangarembga deftly lays out the colonial history which her writing both springs from and exists in opposition to. . . . It's a tall order, but Dangarembga achieves it with grace, through a clear-eyed analysis of both her familial and national pasts. . . . Poetic and powerful.”—Shannon Gibney, Minneapolis Star Tribune

“A well-informed, biting analysis of the legacy of empire.”—Kirkus Reviews

“A powerful account of systemic injustice. . . . Dangarembga’s collection is an essential addition to academic collections on race and gender.”—Library Journal

“Dangarembga offers visions of what could be possible, woven together with historical analysis and precise, clear-eyed criticism. Black and Female is as slim and sharp as a knife.”—Maggie Lange, Bustle

The personal and political commingle (because, as all feminists know, they’re one and the same) as Dangarembga excavates her own history and the history of her nation. The result is a clear-eyed look at what navigating life and art-making as a woman in Zimbabwe has taught her.”—The Millions, “Most Anticipated Books of 2023”

“With her own experiences as testimony, Dangarembga deftly illustrates how Black feminists might just end the white supremacist cisheteropatriarchy once and for all.”—Karla J. Strand, Ms. Magazine

“Black and Female . . . represents a rallying cry for the transformative power of writing; not only to help us make sense of our place in the world . . . but to lend us the imagination and courage to change it.”—The Guardian

“A celebration of artistic creation at the same time as an acknowledgment of unjust worldly realities. [Dangarembga] has a talent for taking activist buzzwords, around women’s agency or the importance of decolonizing the canon, and examining how powerful yet difficult it is to pull up the deep structural and psychological roots of patriarchy and empire.”—The Observer

“From foster care in England to colonialism’s legacy in Zimbabwe, this set of essays on race, feminism and identity is searingly honest, yet hopeful.”—The World Today

“Urgent, compelling, blisteringly brilliant. This timely and elegant collection should be essential reading for anyone who cares about the aftermath of Empire – and that should be all of us. Tsitsi Dangarembga is one of the most powerful writers working today.”—Sara Collins, author of The Confessions of Frannie Langton

“In these moving and necessary essays, Tsitsi Dangarembga insists that ‘the best writing opens the lesion again and again and cleanses.’ She is exactly as good as her word.”—Andrew Motion