You Had To Be There: Rape Jokes (Paperback) 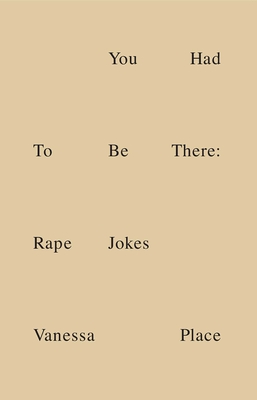 By Vanessa Place, Dave Hickey (Foreword by), Natasha Stagg (Afterword by)
$15.95
On Our Shelves Now

This book is a text version of Vanessa Place's live performance I've got this really great joke about rape, in which the artist recites rape jokes for 45 minutes to a seated audience in a gallery or from a small stage. It is art performance, not stand-up comedy. Many of the jokes were found on various English-language websites dedicated to offensive jokes; inspired by the form, the artist has improved some of the jokes, and written some herself.

Place decided to work with rape jokes several years ago after various stand-up comics were rebuked for making rape jokes on and off-stage; the gist of the criticism being that "rape jokes aren't funny," and that a rape joke is tantamount to rape itself. But Place's work shows that rape jokes aren't rape and considers why rape jokes are very funny to very many people, and persistently so. As Place's audiences have demonstrated, those categorically opposed to the rape joke tend to find themselves straining not to laugh, just as those usually thrilled by such raw language find themselves gagging on something hard to swallow. What then proves interesting is the activation of art: the when, why, and how of such charged words being funny, being revolting, becoming sound, fashioning suspense. To experience this language that hangs thick in the air; to see where, in each of us, the joke sticks.

"It may appear as an act of madness to publish a collection of jokes on rape in our politically correct atmosphere-but it is the right gesture, theoretically and politically. Vanessa Place demonstrates that, when things get really horrible, every gesture of dignity and compassion is a fake, and only humor works: humor which does not make fun of its object but bears witness to our impotence and failure to deal with the object appropriately. No wonder the best films about holocaust are also comedies; sometimes, laughter is the most authentic way to admit our perplexity and despair. Place's book is for everyone who has the courage to confront the horror of rape without the easy escape into comfortable compassion."
— Slavoj Žižek

"Though there's an undeniable logic and rhythm to the unspooling, readers will be forced to navigate Place's text (or 'verbal artifact') on their own, without the usual niceties. This is a potentially terrifying, but perhaps also liberating, experience for readers coddled by the gatekeepers of predictability - one that makes commentary of either stripe seem perfunctory, a failure 'to go beyond either condemnation or understanding.'"
— Los Angeles Review of Books

"Place's work is risky from start to finish, but that is what makes it so uneasily potent. To Place, 'Art is violence, to time and space and representation.' Her work fully lends itself to risk because it thrives on tension through antagonism and the brutal honesty of the darker shades life has to offer."


— The Michigan Daily (U of M newspaper)

"Contains 71 uninterrupted pages of the most f***ed-up jokes I've ever read in my life...Still, I found myself laughing at them. Despite the fact that there's nothing funny about rape, I couldn't stop the smile from spreading across my face when I read one-liners like "Apparently 'Ramadan' isn't to be taken literally. Sorry, Dan!" Though I was ashamed anything that terrible could make me chuckle, laughing at the idea of rape felt kind of good. It was likeIwas somehow bigger than it."
— MEL magazine

"The jokes' lack of specificity makes them infectious, like they could morph to fit and then violate in any context, given the chance. The platform Place offers the predatory makes no move toward absolution, for audience, performer, offender, or language; her project is instead a symbolic, over-the-top stand-in for something we haven't yet figured out how to do in the public arena: let offenses exist, unelided, while we figure out what to do about them."
— Contemporary Art Review LA

As seen in and heard on: Observer, Mean and Sober podcast, Red Scare podcast, The Guardian, The Baffler, Art in America, Slate