The President's Daughter: A Thriller (CD-Audio) 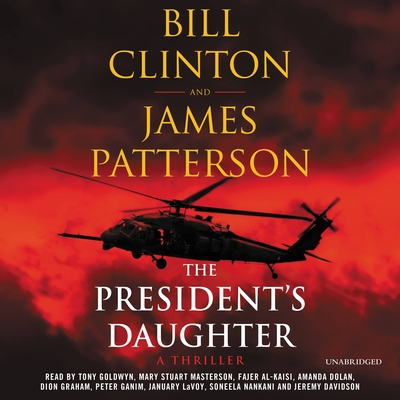 All Presidents have nightmares.  This one is about to come true.

Every detail is accurate—
because one of the authors is President Bill Clinton.

The drama and action never stop—
because the other author is James Patterson.

Matthew Keating, a one-time Navy SEAL—and a past president—has always defended his family as staunchly as he has his country. Now those defenses are under attack.

A madman abducts Keating’s teenage daughter, Melanie—turning every parent’s deepest fear into a matter of national security. As the world watches in real time, Keating embarks on a one-man special-ops mission that tests his strengths: as a leader, a warrior, and a father.

The authors’ first collaboration, The President Is Missing, a #1 New York Times bestseller and the #1 bestselling novel of 2018, was praised as “ambitious and wildly readable” (New York Times Book Review) and “a fabulously entertaining thriller” (Pulitzer Prize–winning author Ron Chernow).

Please note the incorrect labeling on the first printing of this CD package reading 13 CDs. The final length is 12 CDs, and the correct and comprehensive recording is included.

Bill Clinton was elected President of the United States in 1992, and he served until 2001. After leaving the White House, he established the Clinton Foundation, which helps improve global health, increase opportunity for girls and women, reduce childhood obesity and preventable diseases, create economic opportunity and growth, and address the effects of climate change. He is the author of a number of nonfiction works, including My Life, which was a #1 international bestseller. With James Patterson, he is co-author of the #1 international bestselling novel The President Is Missing.  James Patterson is the world’s bestselling author and most trusted storyteller. He has created many enduring fictional characters and series, including Alex Cross, the Women’s Murder Club, Michael Bennett, and Maximum Ride. Among his notable literary collaborations are The President Is Missing, with President Bill Clinton, and the Max Einstein series, produced in partnership with the Albert Einstein Estate. For his prodigious imagination and championship of literacy in America, Patterson was awarded the 2019 National Humanities Medal. The National Book Foundation presented him with the Literarian Award for Outstanding Service to the American Literary Community, and he is also the recipient of an Edgar Award and nine Emmy Awards. He lives in Florida with his family.

“Clinton and Patterson’s standalone sequel to their 2018 thriller, The President Is Missing, puts their respective expertise to good use in a twisting plot.”—TIME

"The President's Daughter is an absolute rocket.  Rich with authenticity only a president could deliver, this story of a father's desperate search for his daughter will have readers burning through pages. Clinton and Patterson are simply the best in the thriller business."—Robert Crais, #1 New York Times bestselling author of the Elvis Cole series

“Brace yourself for a thriller with inside secrets and riveting excitement that only the partnership of Patterson and Clinton could produce. From the president’s opening phone call to the politically tense ending, it’s a page turner with resonance for our times.”—Walter Isaacson, #1 New York Times bestselling author

“The President’s Daughter is a smart, taut, utterly fantastic roller coaster that had me holding on for dear life: a combination of every parent’s worst nightmare—a daughter abducted by a terrorist with a scimitar—and the inside world of Washington, DC (a place where, arguably, the knives are pretty damn sharp, too).”—Chris Bohjalian, #1 New York Times bestselling author of Midwives, The Flight Attendant, and Hour of the Witch

“The President’s Daughter is a spellbinding thrill ride that grabs the reader tight on page one and doesn’t let go till the very last page. With lightning-paced prose and a plot that seems terrifyingly plausible, this is one novel you won’t be able to put down.”—Mark Greaney, #1 New York Times bestselling author of Relentless, a Gray Man novel