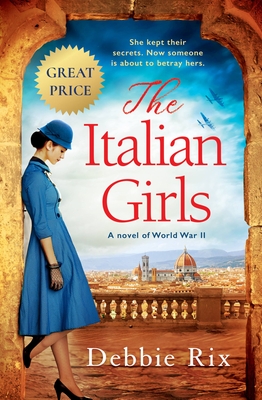 
On Our Shelves Now - Please Allow up to 24-48 hours for Curbside Pickup
She began to turn the pages of the paper more quickly, searching for the details about the war, the scandal, the trial... She thought back to those days at the end, when trust in Italy was in short supply. Betrayal was everywhere and the world went mad.

Italy, 2019: Each morning Livia Moretti drinks espresso in her favorite café in Florence. The tourists simply walk on by. They don’t know of her role in saving this beautiful city during the dark days of World War II. Days that now seem long gone. But in the morning newspaper one day, Livia sees a familiar name—Isabella Bellucci. And she’s jolted back to the past.

Italy, 1942: As an Italian Resistance fighter, Livia monitors radio transmissions and decodes messages that could have the power to safeguard her country and those closest to her. Until the day her life intersects with movie star Isabella Bellucci. A siren of the silver screen, Isabella has cultivated the right connections to ensure her rise to stardom. But when Rome falls to the Nazis, Isabella must make a devastating choice.

As war ravages Europe, Isabella and Livia’s lives are forever entwined as they risk everything to protect the ones they love.
Debbie Rix tells the stories of real women history has overlooked. As an ex‑journalist, she believes historical accuracy is key and she strives to weave her stories around real‑life events. Her novels have been published in several languages, including Italian, Czech, and Russian.

Debbie spends a lot of time in Italy, but when not traveling, she lives in the Kent countryside with her journalist husband, and their children, chickens, and cats.