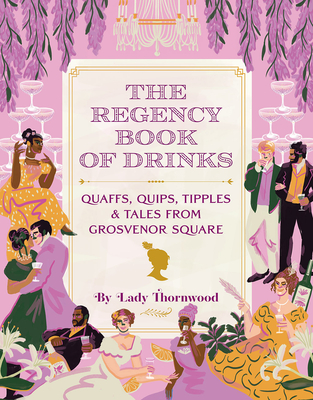 As a society doyenne and undercover libertine, Lady Thornwood knows what makes a drink perfect. In The Regency Book of Drinks: Quaffs, Quips, Tipples, and Tales from Grosvenor Square, this respectable cocktail connoisseur presents a guide of over 75 cocktail recipes shaped by the Regency era in both refinement and ingredients—and served alongside a heaping dose of high-society gossip, scandal, and speculation. Beginning with the gentlewoman's advice on setting up a Regency bar, the best glassware and garnishes, and an overview of the period’s most popular ingredients, the book is then divided into six subsequent recipe chapters drawn from high-society life during the London social season, from occasions such as "The Evening Soirée" to "Delicate Daytime Drinks" to even those rare, deliciously nonalcoholic drinks for "Polite Company." Throughout these chapters, Lady Thornwood weighs in with stylish sidebars and entertaining advice on how to host gatherings that are the talk of the "ton."

Amidst all of her sly cheek and drama, our hostess presents readers and cocktail aficionados with an intriguing true history. In Regency England, as Britain’s Empire expanded, cocktails were becoming social currency—a showcase for wealth, trade connections, and even modern marvels like ice. The Regency shaped British high society for a century and helped launch the cocktail revolution we still enjoy today. As Lady Thornwood says, "As the Regency unfolds, ships sail up the Thames from every corner of the globe freighting exotic spices, vibrant fruits, and marvelous elixirs. Let us toast this bounty and craft it to our purpose. Cocktails stiffen the spine, unlock the tongue, and add sheen to even the dullest drawing room. Coupes up!"
Lady Thornwood is the alter ego of Amy Finley, the former in-house drinks writer for San Diego hospitality group Consortium Holdings. Consortium’s belle epoque cocktail den and boutique bottle shop, Raised by Wolves, made Esquire magazine’s 2019 Best Bars in America list. The group’s apothecary-styled cocktail bar, Polite Provisions, was Imbibe Magazine’s Bar of the Year and a James Beard Award nominee. Finley literally wrote the 500-plus-page book on bartending, booze, and bar operations for Consortium. She is also the author of the memoir How to Eat a Small Country (Clarkson Potter, 2011), and her writing has appeared in Bon Appetit, Departures, and Good Housekeeping.