The New Neighbor: A Novel (Hardcover) 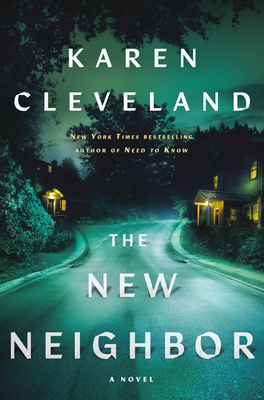 The New Neighbor: A Novel (Hardcover)


Available from Our Distributor (Not in Store)
Secrets, jealousy, and paranoia collide when a seemingly perfect new family moves into a neighborhood with ties to the CIA in this gripping thriller from the New York Times bestselling author of Need to Know.

“Karen Cleveland ingeniously melds domestic intrigue with the lightning pace of a spy thriller, showing us the devastating personal costs of intelligence work.”—Tess Gerritsen, New York Times bestselling author of Listen to Me

Now, facing an empty nest and a broken marriage, Beth is moving from the cul-de-sac she’s long called home, and the CIA is removing her from the case that’s long been hers: tracking an elusive Iranian intelligence agent known as The Neighbor.

Madeline Sterling moves into Beth’s old house. She has what Beth once had: an adoring husband, three beautiful young children, and the close-knit group of neighbors on the block. Now she has it all. And Beth—who can’t stop watching the woman stepping in to her old life—thinks the new neighbor has something else too: ties to Iranian intelligence.

Is Beth just jealous? Paranoid? Or is something more at play?

After all, most of the families on the cul-de-sac have some tie to the CIA. They’re all keeping secrets. And they all know more about their neighbors than they should. It would be the perfect place to insert a spy—unless one was there all along.
Karen Cleveland is a former CIA counterterrorism analyst and the New York Times bestselling author of Need to Know, Keep You Close, and You Can Run. She has master's degrees from Trinity College Dublin and Harvard University. Cleveland lives in North Carolina with her husband and three children.
“Tighten your seatbelt and prepare for a roller coaster ride while confronting secrets, betrayal, long-term friendships in question; all while your life is in shambles, as you battle jealousy and/or paranoia. . . . Karen Cleveland cleverly mines her own experience as a CIA counterintelligence analyst to fashion an immersive and twisted tale with many red herrings and unexpected reveals. The gripping narrative boils over with menace, intrigue, suspense and escalates to a page-turning unexpected denouement.”—Mystery & Suspense Magazine

“Have you ever wondered if you have what it takes to be a spy? In The New Neighbor, former CIA analyst Karen Cleveland shows you how to find the security threat in lurking in your own backyard. Filled with CIA insights that only an insider would know and every trick in the analyst’s toolbox . . . a cunningly constructed puzzle box of a thriller.”—Alma Katsu, author of Red Widow