No Memes of Escape (A Brooklyn Murder Mystery #2) (Paperback) 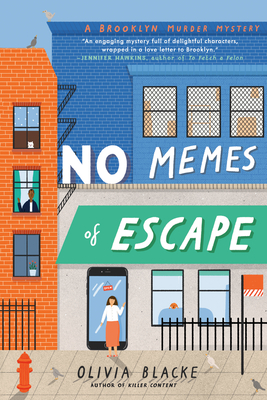 No Memes of Escape (A Brooklyn Murder Mystery #2) (Paperback)

This is book number 2 in the A Brooklyn Murder Mystery series.

Amateur sleuth Odessa Dean is about to discover the only thing harder than finding her way out of an escape room is finding an affordable apartment in Brooklyn in this sequel to Killer Content.

Odessa Dean has made a home of Brooklyn. She has a fun job waiting tables at Untapped Books & Café and a new friend, Izzy, to explore the city with. When she's invited on a girls' day out escape room adventure, she jumps at the chance. It's all fun and games until the lights come on and they discover one of the girls bludgeoned to death...

The only possible suspects are Odessa and the four other players that were locked in the escape room with the victim. She refuses to believe that one of them is responsible for the murder, despite what the clues indicate. In between shifts at the café, Odessa splits her time interviewing the murder suspects, updating the bookstore's social media accounts, and searching for the impossible--an affordable apartment in Brooklyn.

But crime--and criminally high rent--waits for no woman. Can Odessa clear her and Izzy’s names before the police decide they're guilty?
Brooklyn Murder Mysteries author Olivia Blacke writes quirky, unconventional, character-driven cozy mysteries. After shuffling around the U.S.A. from Hawaii to Maine, she currently resides with her husband and their roly-poly rescue puggle, but is forever homesick for NYC. In addition to writing, disappearing into a good book, and spending way too much time on social media, she enjoys SCUBA diving, crocheting, collecting tattoos, and baking dog cookies.
“No Memes of Escape gives a fun, modern spin on the locked room mystery by dropping a dead body in an escape room. While the mystery is properly twisty, the heart of the series is the plucky Odessa Dean and the found family she's created in the hipster haven of Brooklyn. Can't wait for Odessa's next adventure!”—Mia P. Manansala, author of Arsenic And Adobo

“With its laugh-out-loud humor, quirky characters, and clever plot twists, No Memes of Escape is like a tour of Brooklyn’s bohemia with Miss Marple’s savvy niece. You’ll enjoy every page, right up to its hilarious, heartwarming finale.”—Angela M. Sanders, author of Bait and Witch

“An engaging mystery full of delightful characters, wrapped in a love letter to Brooklyn.  This one’s a keeper.”—Jennifer Hawkins, author of To Fetch a Felon

“No Memes of Escape by Olivia Blacke is a mystery you won't want to escape from! Odessa Dean is back in NYC in this follow up novel to Blacke's debut, Killer Content, and this mystery is just as twisty, thrilling, and charming as the first.”—Dorothy St. James, author of A Perfect Bind

“The determined heroine carries the reader past even the most improbable plot twists.”—Kirkus Reviews