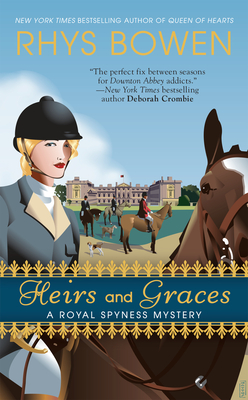 This is book number 7 in the A Royal Spyness Mystery series.

Lady Georgiana Rannoch learns that not everyone knows their table manners when a knife ends up in a duke’s back in the seventh Royal Spyness Mystery.

London, 1934. Entrusted by Her Majesty the Queen with grooming Jack Altringham—the Duke of Eynsford’s newly discovered heir fresh from the Outback of Australia—for high society, Georgie now has the luxurious opportunity to live in one of England’s most gorgeous stately homes. But upon her arrival at Kingsdowne Place, Georgie finds herself in a manor full of miscreants, none of whom are pleased with the discovery of her new ward.

Then the duke announces he wants to choose his own heir and causes quite the hubbub. Somewhere along the way Jack’s hunting knife ends up in the duke’s back. Eyes fall, backs turn, and fingers point to the young heir. As if the rascal weren’t enough of a handful, now he’s suspected of murder. But while Jack may be wild, Georgie would bet the crown jewels it wasn’t he who killed the duke...
Rhys Bowen, a New York Times bestselling author, has been nominated for every major award in mystery writing, including the Edgar®, and has won many, including both the Agatha and Anthony awards. She is the author of the Royal Spyness Mysteries, set in 1930s London, the Molly Murphy Mysteries, set in turn-of-the-century New York, and the Constable Evans Mysteries, set in Wales. She was born in England and now divides her time between Northern California and Arizona.
Praise for the Royal Spyness Mysteries