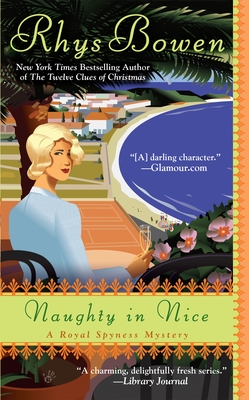 This is book number 5 in the A Royal Spyness Mystery series.

In the fifth Royal Spyness Mystery, Lady Georgiana Rannoch discovers that being a minor royal has its privileges when she visits the glamorous—and dangerous—French Riviera…

London, 1933. Her Majesty the Queen is sending Georgie off to Nice with a secret assignment—to recover her priceless, stolen snuff box from the disreputable Sir Toby Groper. Her Majesty’s trust is an honor, but an even greater honor is bestowed upon Georgie in Nice when none other than Coco Chanel asks her to model the latest fashions.

Unfortunately, things go disastrously wrong on the catwalk and before Georgie can snatch the snuff box, someone’s life is snuffed out in a very dastardly way. With a murderer on the loose—and Georgie's beau Darcy seen in the company of another woman—how’s a girl to find any time to go to the casino?
Rhys Bowen, a New York Times bestselling author, has been nominated for every major award in mystery writing, including the Edgar®, and has won many, including both the Agatha and Anthony awards. She is the author of the Royal Spyness Mysteries, set in 1930s London, the Molly Murphy Mysteries, set in turn-of-the-century New York, and the Constable Evans Mysteries, set in Wales. She was born in England and now divides her time between Northern California and Arizona.
Praise for the Royal Spyness Mysteries