For Blood and Money: Billionaires, Biotech, and the Quest for a Blockbuster Drug (Hardcover) 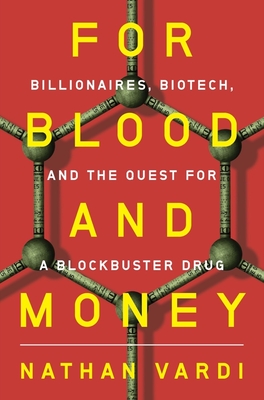 For Blood and Money: Billionaires, Biotech, and the Quest for a Blockbuster Drug (Hardcover)

A gripping business narrative and scientific thriller about what it takes to bring a wonder drug to market—and save countless lives.

For Blood and Money tells the little-known story of how an upstart biotechnology company created a one-in-a-million cancer drug, and how the core team—denied their share of the profits—went and did it again. In this epic saga of money and science, veteran financial journalist Nathan Vardi explains how the invention of two of the biggest cancer drugs in history became (for their backers) two of the greatest Wall Street bets of all time.

In the multibillion-dollar business of biotech, where pharmaceutical companies, the government, hedge funds, and venture capitalists have spent billions on funding, experimentation, and treatments, a single molecule can stop cancer in its tracks—and make the people who find that rare molecule astonishingly rich. For Blood and Money follows a small team at a biotech start-up in California, who have found one of these rare molecules. Their compound, known as a BTK inhibitor, seems to work on a vicious type of leukemia. When patients start rising from their hospice beds, the team knows they’re onto something big.

What follows is a story of genius, pathos, and drama, in which vivid characters navigate a world of corporate intrigue and ambiguous morality. Vardi’s narrative immerses readers in the recent explosion of biotech start-ups. He describes the scientists, doctors, and investors who are risking everything to develop new, life-saving treatments, and introduces suffering patients for whom the stakes are life-or-death. A gripping nonfiction read, For Blood and Money illustrates why it’s so hard to bring new drugs to market, explains why they are so expensive, and examines how profit-driven venture capitalists are shaping the future of medicine.

Nathan Vardi is a managing editor at MarketWatch and former senior editor at Forbes. He writes about big money investors, hedge funds, private equity firms, and the intersection of Wall Street and biopharma. He lives in Edgemont, New York.
A cinematic tour of ambition, greed and desperation in biotech.
— Mandana Chaffa - Scientific American

[For Blood and Money] is a fascinating look at the quest to develop a new drug for blood cancer that targets only cancerous cells and not the healthy kind.

A master class in the machinations of modern drug development.
— Adrian Woolfson - Science

A crash course in biotech success — and failure…. For Blood and Money does an excellent job of highlighting the complexities and expense, both financial and personal, of drug development.

For Blood and Money is a fascinating—and often disturbing—insider view of the genesis of a blockbuster drug, and the often-explosive clash of science, Wall Street cash, ego, and testosterone that are involved.

— Tom Mueller, author of Extra Virginity and Crisis of Conscience

Nathan Vardi has crafted an intimate and gripping account of the rollercoaster journey a new drug takes from molecule to potential medicine. For Blood and Money is a page-turner, chock full of character and intrigue. With classic journalistic shoe leather, Vardi delivers the inside story of biotech, bringing readers into the bare-knuckle backroom of biopharma start-ups where the stakes couldn’t be higher—especially for patients.

Nathan Vardi tells an exciting story of the relentless focus and extraordinary effort required to bring a breakthrough to patients, providing rich detail on the delicate interplay between researchers, biopharma, investors, and regulators that leads to medical innovation.
— Albert Bourla, CEO of Pfizer

A harrowing and improbable story of two rival blockbuster cancer drugs that takes us deep inside the coiling miasma of high-stakes modern medicine, where obsessive scientists, doctors, investors, middlemen, billionaires, and giant corporations alternate, collaborate, and clash to accomplish what none of them could possibly do on their own. Meticulously researched, vividly told, Nathan Vardi’s tale presents a detailed and compelling portrait.
— Barry Werth, author of The Billion Dollar Molecule and The Antidote

For Blood and Money is a blast. Nathan Vardi shows the roles that greed, fear, determination, and, above all, ambition play in developing billion-dollar drugs. A ton of fun and full of insight.

— Gregory Zuckerman, author of A Shot to Save the World

A must-read for anyone who wants to understand how Wall Street investment leads to the products on pharmacy shelves. Nathan Vardi brings a deep knowledge and economical storytelling to the clash between two billionaires behind two cancer drugs and shows real humanity in describing the scientists who were often caught in the middle.
— Matthew Herper, Senior Writer, STAT

[A] fascinating story of... the financial arrangements, medical controversies, regulatory processes, and business rivalries without which the two competing drugs—Imbruvica and Calquence—would not have become publicly available…. An interesting tale of how personal ambition, scientific curiosity, and the pursuit of wealth led to life-extending drugs.
— Kirkus Reviews