Our America: A Hispanic History of the United States (Paperback) 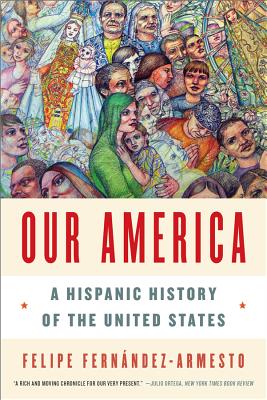 Our America: A Hispanic History of the United States (Paperback)

The United States is still typically conceived of as an offshoot of England, with our history unfolding east to west beginning with the first English settlers in Jamestown. This view overlooks the significance of America’s Hispanic past. With the profile of the United States increasingly Hispanic, the importance of recovering the Hispanic dimension to our national story has never been greater.

This absorbing narrative begins with the explorers and conquistadores who planted Spain’s first colonies in Puerto Rico, Florida, and the Southwest. Missionaries and rancheros carry Spain’s expansive impulse into the late eighteenth century, settling California, mapping the American interior to the Rockies, and charting the Pacific coast. During the nineteenth century Anglo-America expands west under the banner of “Manifest Destiny” and consolidates control through war with Mexico. In the Hispanic resurgence that follows, it is the peoples of Latin America who overspread the continent, from the Hispanic heartland in the West to major cities such as Chicago, Miami, New York, and Boston. The United States clearly has a Hispanic present and future.

And here is its Hispanic past, presented with characteristic insight and wit by one of our greatest historians.

Felipe Fernández-Armesto, the William P. Reynolds Professor of History at the University of Notre Dame, is the author of Pathfinders: A Global History of Exploration and Our America: A Hispanic History of the United States. He lives in South Bend, Indiana, and London.

A valuable contribution to those seeking a broader understanding of U.S. history.
— Janet Napolitano - The Wall Street Journal

With a lucid, engaging style, [Fernández-Armesto] seeks to understand the continuity between the Spanish colonization and the fight for justice led by the Chicano movement in the sixties and by immigration advocates today…This is an invitation to look at America in full!
— Ilan Stavans, general editor of The Norton Anthology of Latino History

In enviably lyrical prose, Felipe Fernández-Armesto has written a bold and compelling synthesis of our nation’s Hispanic past, from the Spanish arrival in the late fifteenth century to the current and contentious debate over immigration reform. Marshaling famous and forgotten individuals and events, he reminds us that there is much more to America’s story than simply Massachusetts Pilgrims and Virginia Cavaliers.
— Andrew R. Graybill, director, Clements Center for Southwest Studies, Southern Methodist University