The Sense of Wonder: A Novel (Hardcover) 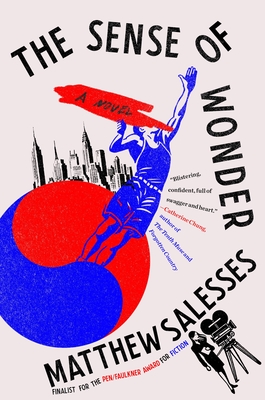 The Sense of Wonder: A Novel (Hardcover)

From the author of PEN/Faulkner finalist Disappear Doppelgänger Disappear and Craft in the Real World comes a "a smart, very meta take" (Kirkus Reviews) on the ways Asian Americans navigate the thorny worlds of sports and entertainment when everything is stacked against them.

An Asian American basketball star walks into a gym. No one recognizes him, but everyone stares anyway. It is the start of a joke but what is the punchline? When Won Lee, the first Asian American in the NBA, stuns the world in a seven-game winning streak, the global media audience dubs it “The Wonder”—much to Won’s chagrin. Meanwhile, Won struggles to get attention from his coach, his peers, his fans, and most importantly, his hero, Powerball!, who also happens to be Won’s teammate and the captain. Covering it all is sportswriter Robert Sung, who writes about Won's stardom while grappling with his own missed hoops opportunities as well as his place as an Asian American in media. And to witness it all is Carrie Kang, a big studio producer, who juggles a newfound relationship with Won while attempting to bring K-drama to an industry not known to embrace anything new or different.

The Sense of Wonder follows Won and Carrie as they chronicle the human and professional tensions exacerbated by injustices and fight to be seen and heard on some of the world’s largest stages. An incredibly funny and heart-rending dive into race and our “collective imagination that lays bare our limitations before blasting joyfully past them” (Catherine Chung). This is the work of a gifted storyteller at the top of his game.

USA Today's 20 Most Anticipated Books of Winter
Salon's 22 Books We're Looking Forward to in 2023
Philadelphia Inquirer's Best New Books to Kick Off 2023
Los Angeles Times's Best Books of January
Esquire's January 2023 Book Club Pick
Vulture's 30 Books We Can't Wait to Read This Winter
Chicago Review of Books's 12 Must-Read Books of January 2023
The Orange County Register's Most Anticipated of 2023
Powell's Picks of the Month
Book Culture's Most Anticipated Books of January
Apple Books's Staff Picks of January
Matthew Salesses is the author of The Sense of Wonder, national bestseller Craft in the Real World, the 2021 finalist for the PEN/Faulkner Award for Fiction Disappear Doppelgänger Disappear, and two other novels. Adopted from Korea, he has written about adoption, race, and Asian American masculinity in The Best American Essays 2020, NPR’s Code Switch, the New York Times blog Motherlode, and The Guardian, among other media outlets. BuzzFeed has named him one of 32 Essential Asian American Writers. He lives in New York City, where he is an Assistant Professor of Writing at Columbia University.
"Throughout The Sense of Wonder, Salesses refuses to shy away from frank discussions of race or racism, even as he centers the hopes and fears, frustrations and professional triumphs, of his protagonists. Salesses also declines to bench a complex formal device that would, in the hands of a lesser writer, dissolve under pressure as the clock runs out. Above all, the novel chooses itself. Like 'the Wonder' or 'Linsanity,' you may just have to see it to believe."—Kristen Evans, The Boston Globe

"What Salesses does here is a remarkable feat of artistic prowess that somehow blends the themes of K-drama with the spectacle of sports drama in a way that resets our frame of reference for the Korean American experience. Indeed, it’s a move that doesn’t seem entirely possible until you see the jump yourself."—Ron Charles, The Washington Post

"Matthew Salesses strikes the perfect balance between humor and heart-wrenching insights on the limitations of our collective imagination."—Chicago Review of Books

"You get the feeling that PEN/Faulker finalist Matthew Salesses was made for this moment, for this particular story."—Hanh Nguyen, Salon

“In this stirring and stylish satire, Matthew Salesses takes several cues from the Linsanity era of 2012, when Knicks point guard Jeremy Lin became an unexpected international phenomenon, to tell a larger story of Asian Americans making their way across a reductive and racist cultural landscape."—Patrick Rapa, The Philadelphia Inquirer

“Salesses moves, fakes and pivots his narrative with practiced, sly expertise. He cracks inappropriate jokes, waxes philosophical, details (biological and adopted) family dysfunction, confronts cultural history, deciphers the tropes and plots complex dramas, all while deftly exposing pervasive racism and sexism in two of the worst, inequitable industries. And yet, he also manages to impart an easy, welcoming bluntness: 'What Won made Asian Americans feel was mimetic wonder.' Social ills notwithstanding, who can argue with that?”—Shelf Awareness

"A brilliant and scathing chronicle of two Asian Americans as they try to find their place in contemporary sports and media...Salesses fills the page with all the bold, kinetic confidence of an athlete striding onto the court."—Publishers Weekly (starred review)

"A remarkable novel of love, obstacles, and possibilities...The Sense of Wonder explores multiple Korean American experiences through vivid, unforgettable characters. [Readers] will love the depth of the characters' perspectives on being people of color in a white-dominated society."—Booklist

"Salesses is a gifted scholar, and this novel further establishes him as one of today’s smartest writers on the subject of race and relationships—and the narratives we tell about both."—Isle McElroy, Vulture

“What a pleasure to read work that spits off the page, fiction that vibrates and twitches with life. The Sense of Wonder is exactly that kind of book, one that refuses to let you forget about it, a novel that wants you to remember its story long after the initial read is done. This is a wildly physical book, the beating heart of it smashed up against the ribcage of the binding, thumping hard, demanding attention. I have never read anything like it. Matthew Salesses is a genius and The Sense of Wonder is a genuine marvel.”—Kristen Arnett, bestselling author of With Teeth and Mostly Dead Things

“Matthew Salesses's new novel is so freaking good I can't stand it. Blistering, confident, full of swagger and heart, it is also an exhilaratingly smart treatise on race and our collective imagination that lays bare our limitations before blasting joyfully past them. A must read!”—Catherine Chung, author of The Tenth Muse and Forgotten Country

"Sharp, funny, and searingly original, The Sense of Wonder is a tour de force from one of the most inventive writers working today."—Kirstin Chen, author of Counterfeit

"When Won is signed by the New York Knicks, it seems at first that his dreams are coming true, but instead he is drawn into a world rife with high-stakes rivalry, subterfuge, and corrosive racism. The Sense of Wonder is equal parts a love letter to the intricate art form of basketball; a blade-sharp page-turner that delves deep into the rotten heart of America; and an ode to kdrama and the liberating power of love. Matthew Salesses brilliantly upends expectations on every page and, by the end, a powerfully new kind of story surfaces. The Sense of Wonder  is revelatory and original and I absolutely loved this novel."—Laura van den Berg, author of I Hold a Wolf by the Ears