You Don’t Know Us Negroes and Other Essays (Paperback) 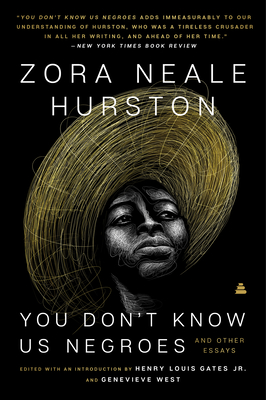 You Don’t Know Us Negroes and Other Essays (Paperback)

Spanning more than 35 years of work, the first comprehensive collection of essays, criticism, and articles by the legendary author of the Harlem Renaissance, Zora Neale Hurston, showcasing the evolution of her distinctive style as an archivist and author.

“One of the greatest writers of our time.”—Toni Morrison

You Don’t Know Us Negroes is the quintessential gathering of provocative essays from one of the world’s most celebrated writers, Zora Neale Hurston. Spanning more than three decades and penned during the backdrop of the birth of the Harlem Renaissance, Montgomery bus boycott, desegregation of the military, and school integration, Hurston’s writing articulates the beauty and authenticity of Black life as only she could. Collectively, these essays showcase the roles enslavement and Jim Crow have played in intensifying Black people’s inner lives and culture rather than destroying it. She argues that in the process of surviving, Black people re-interpreted every aspect of American culture—"modif[ying] the language, mode of food preparation, practice of medicine, and most certainly religion.” White supremacy prevents the world from seeing or completely recognizing Black people in their full humanity and Hurston made it her job to lift the veil and reveal the heart and soul of the race. These pages reflect Hurston as the controversial figure she was—someone who stated that feminism is a mirage and that the integration of schools did not necessarily improve the education of Black students. Also covered is the sensational trial of Ruby McCollum, a wealthy Black woman convicted in 1952 for killing her lover, a white doctor.

Demonstrating the breadth of this revered and influential writer’s work, You Don’t Know Us Negroes and Other Essays is an invaluable chronicle of a writer’s development and a window into her world and mind.

Zora Neale Hurston was a novelist, folklorist, and anthropologist. She wrote four novels (Jonah’s Gourd Vine, 1934; Their Eyes Were Watching God, 1937; Moses, Man of the Mountain, 1939; and Seraph on the Suwanee, 1948); two books of folklore (Mules and Men, 1935, and Tell My Horse, 1938); an autobiography (Dust Tracks on a Road, 1942); an international bestselling nonfiction work (Barracoon: The Story of the Last “Black Cargo,” 2018); and over fifty short stories, essays, and plays. She attended Howard University, Barnard College, and Columbia University and was a graduate of Barnard College in 1928. She was born on January 7, 1891, in Notasulga, Alabama, and grew up in Eatonville, Florida.

M. Genevieve West is Professor of English and Chair of the Department of English, Speech, and Foreign Languages at Texas Woman’s University. A scholar of Zora Neale Hurston’s work, West has contributed to prestigious academic journals such as African American Review, Amerikastudien/American Studies, Receptions, and Women’s Studies. She is the author of one work of literary criticism, Zora Neale Hurston and American Literary Culture, and the editor of Hurston's Harlem Renaissance short stories Hitting a Straight Lick with a Crooked Stick.

This volume enables readers both steeped in and new to Hurston to discover her acerbic wit, her crisp prose, and the breadth of her artistic ability and interests .... an invaluable nonfiction companion to the collection of Hurston's short stories.” — Booklist

“I liked this book... Reading Hurston, you always wonder what shape her dignity will take next. Her style and spark were her own.”  — New York Times

“Hurston is bold, honest, and provocative, as always, whether she’s pontificating on the ideological mirage of white feminism or insisting that school integration did less than we thought to improve Black students’ educations. The lyrical and uncompromising prose in this collection offers a window into the world of one of our greatest literary minds.”
— Vulture

"Dazzling... provocative, funny, bawdy, informative and outrageous. Gates and West have put together a comprehensive collection that lets Hurston shine as a writer, a storyteller and an American iconoclast."
— Washington Post

“You Don’t Know Us Negroes and Other Essays by Zora Neal Hurston creates a powerful and nuanced mosaic of Black culture.”
— Christian Science Monitor

"This is a carry-it-everywhere-with-you kind of book, perfect for times when you need some introspection as diversion. “You Don’t Know Us Negroes” is like that, and that’s just the way it is."
— Philadelphia Tribune

“You Don’t Know Us Negroes” adds immeasurably to our understanding of Hurston, who was a tireless crusader in all her writing, and ahead of her time. Though she was often misunderstood, sometimes maligned and occasionally dismissed, her words make it impossible for readers to consider her anything but one of the intellectual giants of the 20th century. Despite facing sexism, racism and general ignorance, Hurston managed to produce a written legacy that, thanks to enduring collections like this one, will engage readers for generations to come.”
— New York Times Book Review

"The depth and power of Hurston’s prose continues to dazzle." — The Guardian

"With much of her work having been released and re-released posthumously, this collection recogni[z]es one of the finest writers of the 20th century." — Sunday Express (UK)

“You Don’t Know Us Negroes and Other Essays showcases the author’s breadth in a thrilling, if also uncomfortable, journey.” — The Atlantic