The Meanest of Meanies: A Book About Love (Hardcover) 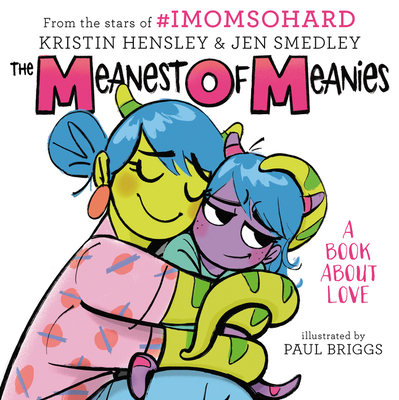 From the beloved New York Times bestselling #IMomSoHard duo, Kristin Hensley and Jen Smedley, The Meanest of Meanies is a hilarious but heartfelt look at love and motherhood from the queens of modern motherhood themselves.

The creators of the social media sensation #IMomSoHard, Kristin Hensley and Jen Smedley, know what it means to be a M.O.M.—the Meanest Of Meanies!

It’s cheering the loudest at the spelling bee, making crazy dinners because someone is a “picky eater,” bath time (enough said?), and only reading four books at bedtime when someone has piled up about eighty-two of them.

KRISTIN HENSLEY and JEN SMEDLEY have been performing, teaching, and writing comedy for a combined 40+ years. They have been moms for one quarter of that time and it shows. From Pinterest-induced panic, to trying to get your kid to eat just one damn green bean, to wondering why it feels like you disappeared the day you became a mom, they get it. They get you. Kristin and Jen know firsthand that parenting is a hard job and they invite you to join them in taking it all a little less seriously. After all, Jen currently has four days of dry shampoo in her hair and Kristin’s keys are still in her front door. They try, they fail, they support each other, and they mom as hard as they can.