Sharpe's Assassin: Richard Sharpe and the Occupation of Paris, 1815 (Hardcover) 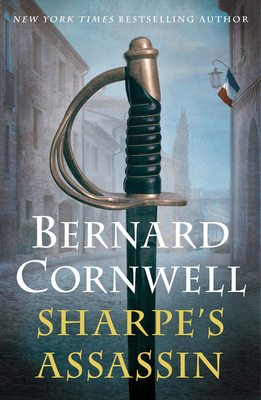 Sharpe's Assassin: Richard Sharpe and the Occupation of Paris, 1815 (Hardcover)

And the one man you want on your side.

Sharpe's Assassin is the brand-new novel in the bestselling historical series that has sold more than twenty million copies worldwide.

BERNARD CORNWELL is the author of over fifty novels, including the acclaimed New York Times bestselling Saxon Tales, which serve as the basis for the hit Netflix series The Last Kingdom. He lives with his wife on Cape Cod and in Charleston, South Carolina.

“Last seen in 2007’s Sharpe’s Fury, the indestructible Richard Sharpe has one more battle to fight in bestseller Cornwell’s rousing 24th novel featuring the English rifleman. . . . The action builds to a high-stakes sword fight between Sharpe and a French officer that’s resolved in an unexpected and satisfying way. Series fans will be pleased to see Sharpe retire from the army on a high note.”
— Publishers Weekly

“This is first-rate historical fiction that any fan of the genre will enjoy.”
— Kirkus Reviews

“As usual, this is historical fiction on a grand scale, a period-piece thriller that will enrapture fans of the long-running series. Sharpe stays true to his down-and-dirty roots, and Cornwell steps back into Sharpe’s world as though he never left it. A boisterous return of a favorite character.”
— Booklist

Praise for the Sharpe Series:  “Prepare to have your buckles swashed.”
— People

"Richard Sharpe has the most astounding knack for finding himself where the action is . . . and adding considerably to it."
— Wall Street Journal

“Excellently entertaining. If you love historical drama, then look no further.”

“If only all history lessons could be as vibrant.”
— San Francisco Chronicle